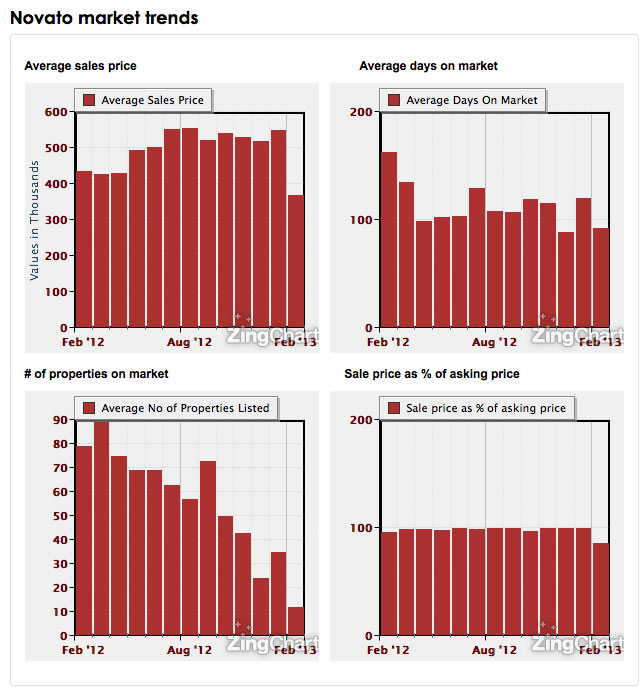 The video above shows the continued strength of the Novato housing market. A combination of low inventory and high demand has resulted in a strong market for the first half of 2012. Watch the video above and learn about the current state of the Novato market.

The Town of Novato

Located in the rolling hills and valleys of Northern Marin, Novato is the second largest town in the county. While Novato used to be known as a gateway to the wine country of Sonoma and Napa County, it’s increasingly being discovered as a destination in its own right. The reasons? Good schools, great weather, a lively downtown, and homes that provide the best value in Marin.

Upscale housing includes the luxury homes of Black Point, waterfront living on the lagoons of Bel Marin Keys, Bahia Park along the banks of the Petaluma River, the wooded Alameda Del Prado, and Indian Valley Road and its horse country estates.

Big box shopping is concentrated in the Vintage Oaks shopping center at Rowlands Boulevard on 101, which houses a Costco, Target, Macy’s and Marshall’s. Downtown, the recent beautification program has brought new life to the businesses along Grant Avenue. The downtown area is alive with a Tuesday evening farmers’ market, outdoor movies, parades, and art and wine festivals.

In the 90s, military base Hamilton Field was converted to new housing and a business park. The former hangars now house cutting edge biotech companies, digital development companies, the Marin Museum of Contemporary Art, and more than 40 artist’s studios. Novato is also home to the headquarters of large insurance company Fireman’s Fund, and the Buck Institute, the nation’s only research organization to focus solely on aging. Which means, you really could grow old here.